After 25 years have passed, Wano arc Act 3 starts. Momonosuke and his subordinates gather in Udon, but no ships and 4000 soldiers can be found. There is a sign of having been attacked.

Momonosuke can’t get in touch with Luffy and Hyou.An incident occurred last night.

Momo: What are you doing? Inuarashi!

Some translation from AP

Crocus: Roger, you drank too much! Calm down on the drinking!

Roger: I don't want to be told that by a drunkard doctor!

Rayleigh: Do you need a hand with something Oden-San?

Buggy: I can also lend you a hand, Oden San!

Shanks: You're going to help? You're just a burden!! What about me Oden-san?

Oden: Rayleigh, Buggyjiro, Shankstarou, thanks but, we the Kouzuki's are the ones that have to handle this.

Buggy: I say it every time, but why the hell am I (Buggy)Jiro!?

Oden: Why Wanokuni has been closed off has always been a mystery. 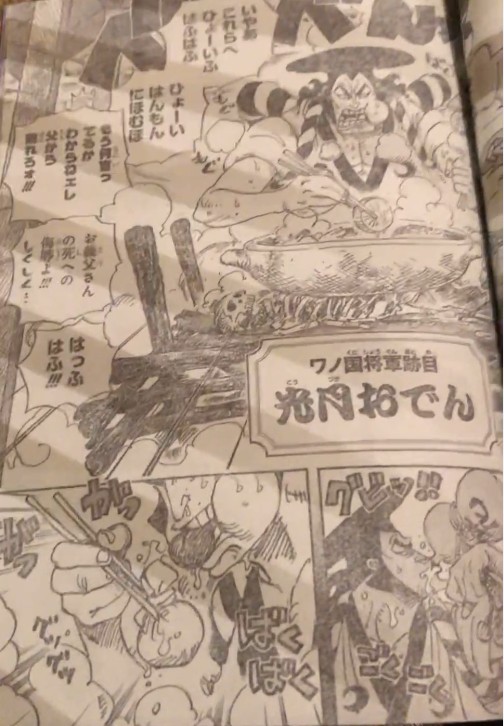 -the attack of the mountain god wild boar continued, and there was a lot of chaos. Everyone tried to find the white pig.

- Kinemon wanted to explain to everyone he is who brought the white pig, and kinemon didn't want to live because he presumed otsuro died ,oden stopped him and uses two swords style to repel the mountain god

Translation by Sandman from Ap :

Chapter title is “Daimyo and the vassals”.

Oden leaves Hakumai and heads for Kuri in order to defeat Asura. Kuri is a notorious place where even Shogun Sukiyaki can’t handle.

All money was stolen from a safety box after Oden left. Actually Orochi was the culprit, but he insisted that Oden stole the money.

Oden heads toward Kuri rampaging throughout Wano. During his journey, some people who admire Oden become his subordinates.Oden succeeds in turning Kuri into peaceful place. Sukiyaki stops breaking off the relationship with Oden and gives him a title of Daimyo of Kuri.

After 6 years pass, some pirates who used to belong to Rocks Pirates which got destroyed are getting more famous with their new subordinates.

In the beach of Kuri, Kawamatsu find 2 creatures whom he is not sure whether they are human being or not.

Izou in Whitebeard Pirates is an elder brother of Kiku. They are the sons of Japanese traditional dance family, but their father was thrown into jail.

Both of them are so hungry that they eat some odens without permission.

Additional spoiler from 5ch via @Arara

Orochi stole not only money but also Hebi Hebi Devil Fruit (Yamata no Orochi DF) from the safety box.

-Chapter ends with note about the Rocks Pirates. And Inu and Neko arriving on the shore of Wano

Edit: Translation for the images.

2nd image: Oden: "A Daimyo will need his Kashin to follow him."

The remaining members of Rocks Pirates formed new crews and is making a name for themselves in the seas.

Kuri Beach. Kawamatsu: What is this? An animal? A human with many furs? Or maybe monsters? Makes me uneasy.

3rd image: Two brothers who are hungry. They are dancing to earn money for food, but is looked down by others.

From the names and introduction, one of them is Kikunojo, the other one is Izo from Whitebeard Pirates' crew. They are confirmed to be brothers.

Their dad was convicted of a crime and they lost their family, and they went to Oden and ask for food.

Additional info: Izo and Kiku are from Hanayagi family, a family of dancers. It is based on one of the largest dancing style in Japan currently, the Hanayagi style (a type of Kabuki), founded in 1849. Here is the Wikipedia page in Japanese: https://ja.wikipedia...ia.org/wiki/花柳流

-Even though his request of joining Whitebeard was turned down, his stubbornness led to Whitebeard and his crew sneaking away at night to leave.
-Oden jumps into the sea, and they captured Oden and Izou, who chased after Oden, with ropes.
-Whitebeard decided that Oden will stay this way, and he only pull Izou up.
-He then said to an enraged Izou that if he wants him to give up then he’ll have to persuade Oden himself.
-They made a deal that if Oden can endure for 3 days, then he’ll let him on the ship.
-Oden was exhausted when he had just a hour left.
-On the beach Toki was troubled by bad guys, and that’s when she met a worn out Oden.
-The bad guys appeared again after they’ve been chased away.
-It’s Whitebeard who came back that helped them. Oden, Izou, Toki all got on Whitebeard’s ship.
-Inu and Neko followed them secretly
-Oden’s happy that he’s traveling from places to places.
-Shanks and Buggy read about Whitebeard Pirates’ successful activities from newspaper.
-And Roger who says that he wants to meet that samurai
Chapter end. Break next week.

Spoiler Image 05 : Oden uses chain to get on to the ship

Spoiler Image 06 : Oden holds onto the chain while Izo is holding him

Spoiler Image 08 : Whitebeard Pirates welcoming Oden and his retainers with a big celebration

Chapter 967 is out with "ok" translation 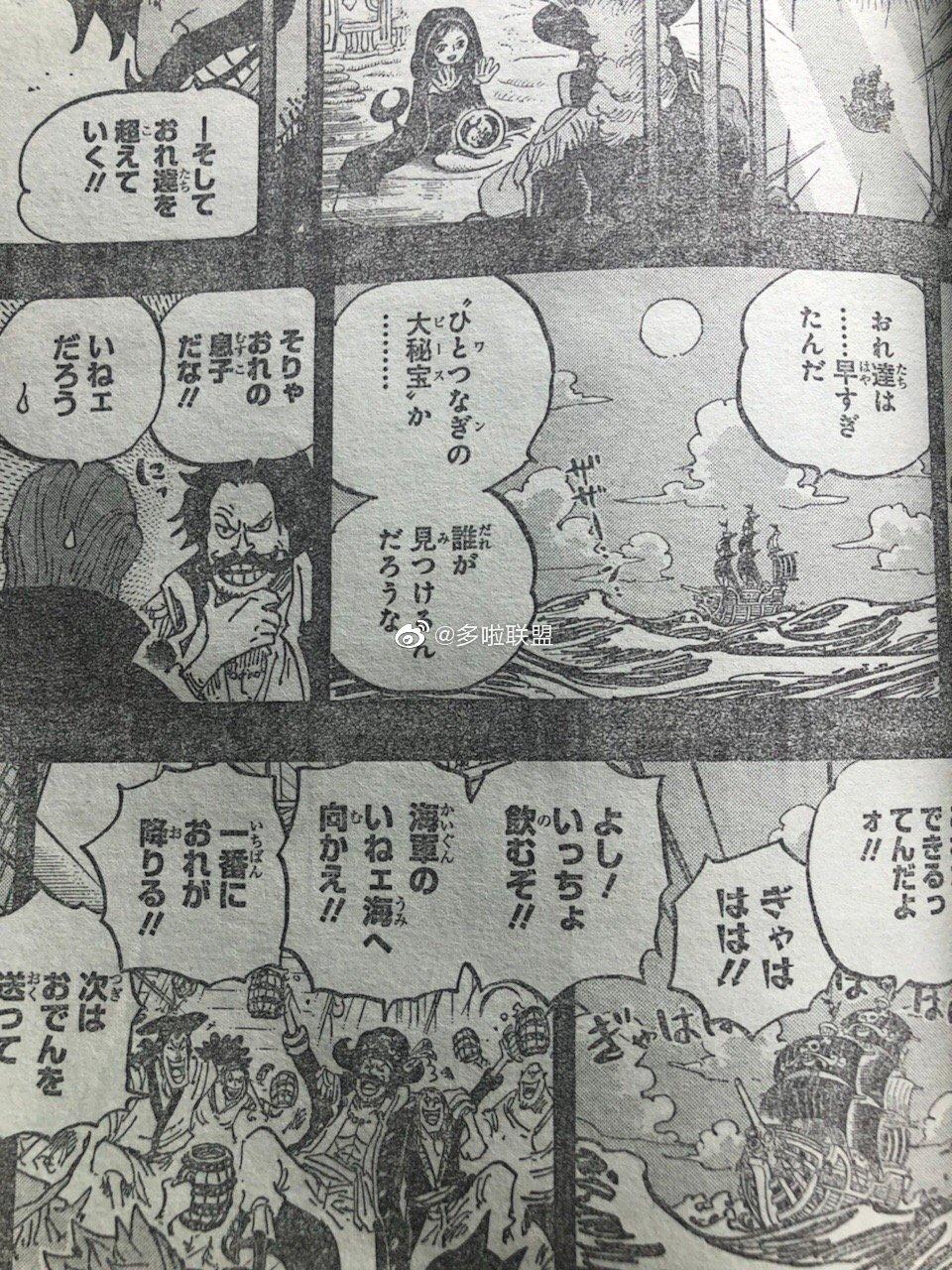 - Looks like we were too early
- I wonder who will find the One Piece next?
- My son, of course!- You don't have one
- It's not too late to make one yet!

Oden as Narrator:
"The world assigned a general term to refer to everything Roger had obtained, calling it, "One Piece."
Roger?: "I don't know (how they came up with that name)! Wahahaha!"
Roger?: "But thanks to that notoriety, everyone - (cut off)"
Akatarou (Shanks) parted with Roger, who had returned from Raftel, with a laugh, of course, since after all they were sure to meet again."
The man known as "Dark King," the oldest member of the crew, Rayleigh
Upon leaving him with some sort of final words, Roger deboarded the ship.
He took with him a powerful medicine given to him by the ship's doctor, Crocus.
Although his illness was already in its final stages.
It was a man's farewell. No one shed a tear. The crew of the Pirate King would never do something like crying.
- Oden narration ends -


Oden: "Toki...!!"
Toki: "It's fine, Oden-san! My injuries have already healed!"
Oden: "You were pierced by an arrow...!" Oden: "...!!"
Oden: Our children...You did well protecting them! It must have been painful!"
Toki: "Wait, Oden-san! If you get enraged just over something like this and do something, the backlash from the enemy will-"
Oden: "Something like this!?
Toki, you...You haven't heard the "tales" about me, have you?"

Flower capital castle
Orochi Subordinate being cut down: "Gyaaa!"
Orochi Subordinate on Den Den Mushi: "Shogun Orochi! Please answer!"
​
Orochi: Wait!! Oden-san...Oden!!! Think carefully!! Kaidou won’t stay silent
If you cut me down!! Think about what’ll happen to this country!!
Oden: I will, after I cut you down
Orochi: That’s right, this guy is crazy!!!

One Piece Chapter 970 Title : "Oden Vs. Kaido".
In the cover, Bege and Vito are inmobilized by Dressrosa's residents that try to kiss them.
From VegaPank
-Oden was defeating Kaido, but Oden defeated by kaido because they took Momonosuke hostage
-Oden imprisoned, execution in 3 days
-Oden is sentenced to be executed by boiling alive
More Spoilers
Reason "Why oden keep dancing for 5 years" reveal in this chapter in some way. Also related to Momo.
Break next week 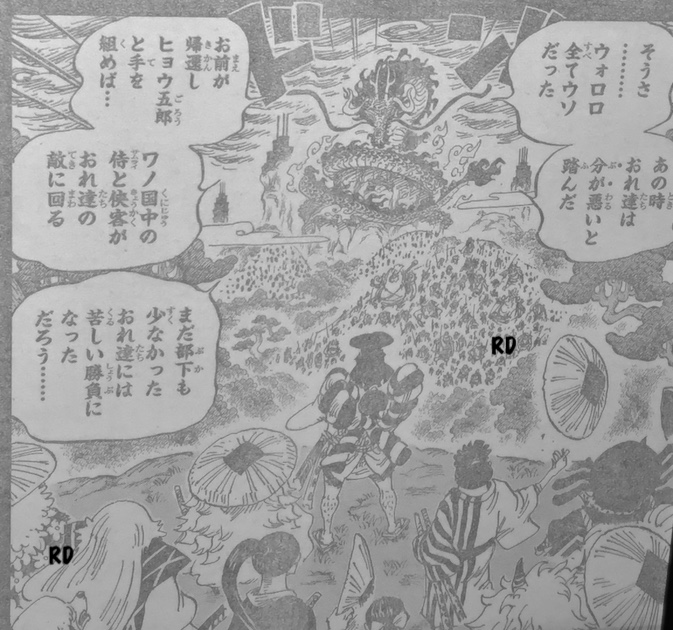 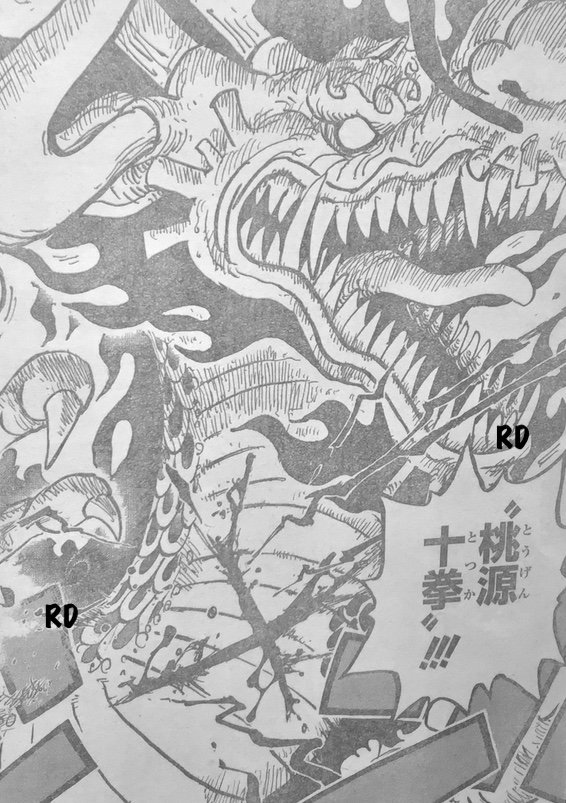 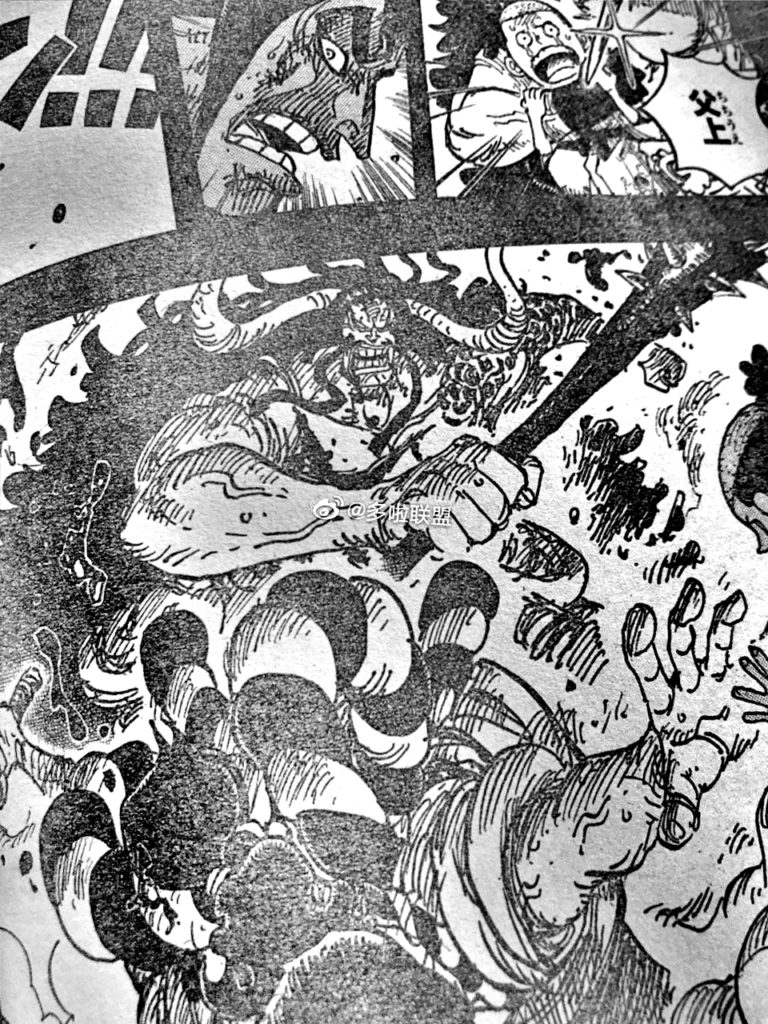 In the cover, Gotti cross the city to save Chiffon.

-Oden is still alive in the chapter.

-Orochi complains about what they did to his grandfather

-Others wanted to pursue justice and kill Kurozumi family

-Oden cooperated with Orochi. The whole plot reveal in this chapter.

-King appears in this chapter also.

-Oden said " I want another chance, I need to be alive." seems there boiled oil.

-Oden asked kaido to let him live, and to give him a chance

-Oden ask Kaido: I want a chance, I can’t die yet

-Nothing on the traitor

-The deal was he can save 100 lives per dance

-Oden said if he can endure the boiling for the time they decided, then they have to let those who are still alive go

-Oden got in, the others tried to follow him but Oden stopped them.

-Then the execution starts, with Oden holding onto the platform the others are staying on.(only about 5 min pasts, continues next week)

Oden(probably): Once the ship I am making completes... after 5 years I will ship out of this country, believe this promise between the 2 of us.

Spoiler Image 01 : A wano citizen is on fire

One Piece on break due to Oda being ill. Next chapter will be around March 8th. It is not Corona Virus. Given that this announcement is from a leaked scan of Jump, this illness was a few weeks ago and Oda might have already recovered.