I have to say, I haven't seen any of the newer series beyond Frontier I believe it's called. But I do so love the animes.

I started Xross Wars but I really don't feel like finishing. 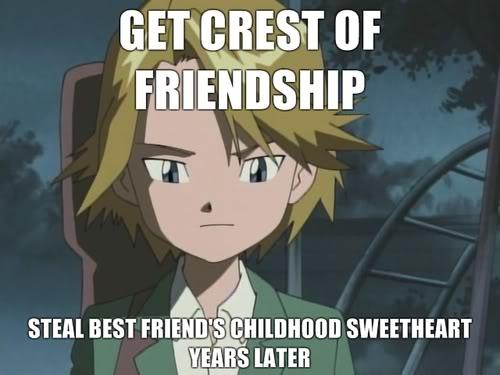 ALL OF MY RAGE.

Friendship is about accepting each other's choices, if Tai was a real friend - and he is - he'd accept this.

I've seen up to Season 3. I kinda lost the series after that. I heard that they are making a video game of Adventure 1, if that gets released here I might have to pick it up.

I understand, the thing is, you have to accept that your childhood sweetheart isn't your soul mate. 3:

It's not about that! I understand that! What I cannot stand is poor writing. It's like you're reading a story and all signs are pointing to one end, but then it just suddenly changes for no good reason. It is frustrating.

It's not about that! I understand that! What I cannot stand is poor writing. It's like you're reading a story and all signs are pointing to one end, but then it just suddenly changes for no good reason. It is frustrating.

Digimon Adventure and Adventure 02 were definitively the best seasons.

Somehow I'm pretty lonely on the side who hate season 3, dunno why it's so popular. I really don't like it. Best part about it was leomon's death :devil: and Beelzemon in general.Everythingelse was crap.

Digimon Frontier was even worse than that in my opinion (for my luck there are quite some people who think the same).

Then Digimon Data Squad was again quite cool. I liked it a lot because it had more of the feeligns of the first 2 seasons, while still being new and doing something else (and come on Royal Knights and BantyoLiomon were just awesome)

now don't let me talk about Xross Wars... That's the worst digimon season ever created and there I thought with Data Squad it found it's old glory again and would go on with it and then THAT crap -.-

President and Founder of the Roronoa Zoro Fanclub

"From now on I won't lose to anyone ever again! Until I can defeat that man and become an invincible swordsman! I won't lose again! Forever!"


- Realization of a man

"Sorry about that... I thought you were a frog at the bottom of a well."

Season 3 was very, very dark compared to the rest of the series, which is why I liked it.

Season 3 was pretty awesome. I didn't like Season 4. I mean, becoming the Digimon? That was just weird.

Data Squad was cool, because instead of kids we had a group of teenagers and adults as the main characters.

I never saw that one. Was it good?

I never saw that one. Was it good?

It featured the Royal Knights and referenced the Seven Demon Lords... Not to mention that we also got to see who the true god of the digital world is. Not to mention we have the first human villain who is completely evil rather than a misguided man. The bad guy, Kurata kills Digimon and harvests their data to make mindless robot Digimon called the Gizumon that destroy Digimon permenantly by corrupting their data so they can't be reborn as Digi-Eggs.

season 4 was my favorite turning into digimon is pretty cool.

Need me to explain a little...

The Royal Knights are Twelve mega-Level Digimon powerful enough to take on about ten normal Megas... They are guardians of Yggdrasil, the computer that controls the Digital World.

Man, I am definitely behind on Digimon...