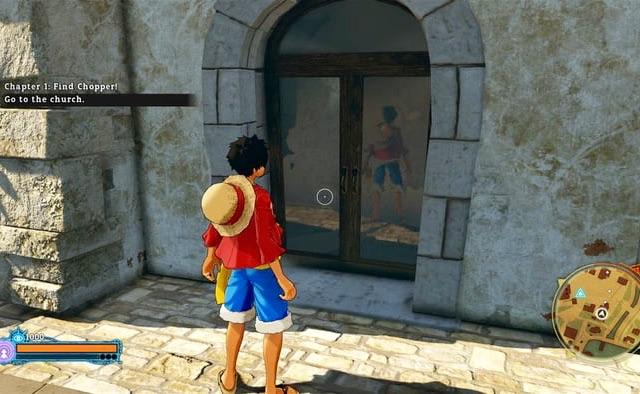 thats how you milk the money


I bet nami's reflection will be better. When do you unlock different characters?

After playing game 19 hours and beat game first time, i didn't had 100% so i found out there's no New Game +

Only 17 Chapters (On 8th when you're about to fight Fujitora, you get access to Gear 4th to use and if you start doing chapter 14, you cant do side quests) and sometimes in future game gets 3 dlc episodes.

After that i went "100%" so i opened all treasure chests, did all side quests and found all buried treasures but i found big problem...

If you missed chance to get 100% karma on certain character before reaching 14 and specially if its those like Fujitora, you're out of luck, there's no way you can get 100% anymore.

I really hope there will be update that fix that problem

So bit over 24 hours spend and i cant get 100% game file, what a failure! That means i would have to start all over again if i want get 100% file! So i cant find out is there any extras if you get all karmas 100%, found all treasures etc. All i found that was some extra cutscenes during in chp. 15 and some bosses that you fought before might help you to destroy robots in one of 9 places where you need to go (Example if Rob Lucci karma is 100%, he will appear in Steel City and helps you to destroy robots) If you ask: Yes, they will damage robots and yes they can also destroy them.

If you have 100% Isaac karma, end scene in graveyard changes bit: It turns out Isaac survived from that blast (somehow) carrying flowers.

Also i was bit disappointed on costumes you can unlock... I was hoping at least one outfit that would fit on final battles (Example OP Strong World black outfit or Pirate King outfit or something like that)

If you just do main missions, its probably way under 10 hour game play. Also noted that i didn't use any guides / help so i was sometimes bit lost where to go for reach some treasure chests.

1. Visit and destroy all robots in 9 different places (Its bit pain because you cant use fast travel and depending what route you use it can take long time)

- If you have 100% karma on certain characters, they help you destroy robots in fight so it will be bit faster and some may even SKIP fighting parts (Not sure for others, but if you got 100% karma on Buggy, you get cutscene where Buggy destroys robots and you dont need fight any of them so there's at least one skip-able fight)

2. Climb the mountain to fight Akainu and after that go to cannon and launch yourself to Sky Prison

3. Reach Isaac and fight him and that's it.

Finally got all karmas 100%, got almost all achievements (Only 2 achievements missing) and yes, Kuzan and Fujitora also roaming, but getting to them appear is another story... Took several tries before i got fujitora to appear and after that i got Kuzan's side mission.

Anything for getting all that done, any extra stuffs etc. (Beside some cutscenes)?

Answer in short is:

I'm gonna get those last achievements and finish game once more after that and if then there's nothing extra stuffs to get, i say its not worth get 100%

34:29 is my final time. I got 100%, got all achievements and beat game one more time, check once more if there's something bonus after you get 100% game file and what a surprise: There's nothing new...

Oh right, forgot to mention that Pirate Warriors 4 was announced.

World Seeker added a Zoro DLC. Look at his minimap. 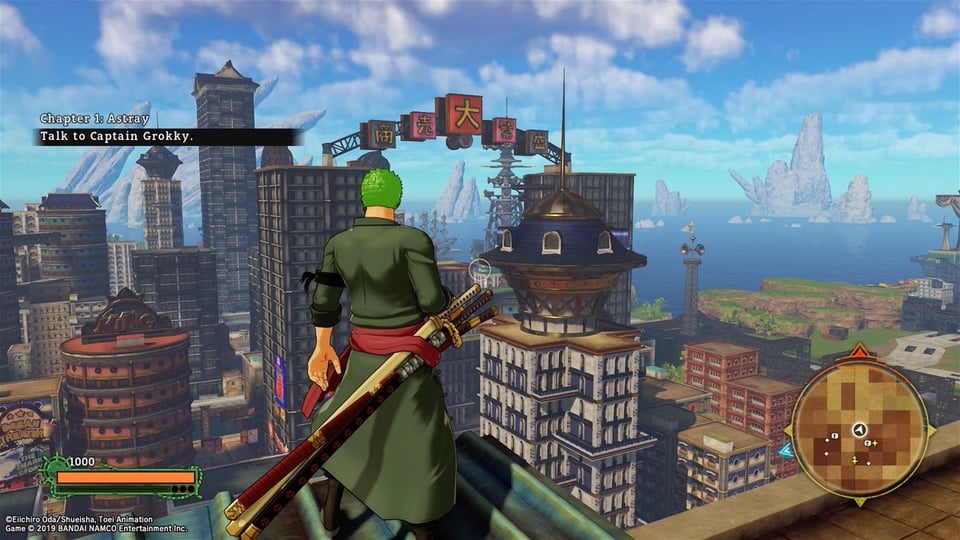 New Pirate Warriors 4 trailer. Lots of stuff from Whole Cake Island. Reiju is playable. Another source claims that the other Vinsmokes are playable too. I don't know if that includes the judge or not yet.

I love completely uninjured luffy telling sanji he can kick him as much as he wants. So they cant animate luffy bleeding, but they can animate sanji crying.
Good. At least we have our priorities set.

Oh look at that.... it is the wci story. Is that the story for the game? I know the 2nd pirate warrior had an original story kinda that involved moria killing WB, and now that I think about it the 3rd did also right?
So it is kinda weird to see this trailer going through wci. Or is it? Is this how the pirate warrior trailers are normally? I have never seen a pirate warrior trailer before.
Do you guys think there will be an original story? I mean their original stories are never anything to wrote home about....but... I already read wci, I dont need to play it also...

Oh you know what would be an awesome original story idea? Redo all of the NW and this time Law's plan is to take out BM. Then law and luffy gather allies from all around the nw and they attack wci. It could be like a more fun version of wano.

Law can trick DD into joining the fight. (Using his sub. that looks like the DD crew subs, to sink BM ships, bm sinks DD's ships, now dd and bm are at war) G66 can join because sanji promises them they can examine BM's corpse and use that info to improve their clones. The marines hear about this and they send Fuji and kizaru to aid or observe BM'S down fall. Sabo hears about this and goes to stop luffy from walking into the marines trap. Bege can still be there. Maybe if they are up to it, they can have urgoue still at WCI and the group arrives as he finishes off snacks, so he can be there too. Oh and if the animators are feeling up to it they can even have jack and co show up and attack BM because... idk... they are jerks and hate BM? Lol or because luffy still has momo but BM captures him. So jack now has to defeat BM to capture momo. Speaking of momo the samurai can show up to help because they still owe luffy a life debt.

Now I dont know how far ahead the game is in the series, but maybe even kiadou makes an appearance at WCI.

That would be a fun game.

The 3rd game was pretty much just the normal storyline as far as I remember. Kinda like the first game but without the non-musou elements where you did terrible platforming sections. And animating Sanji crying is easy compared to making a new character model for Luffy. They rarely even change the outfits on characters unless it's alternate costumes. The 3rd game had Timeskip Perona during pre-skip Thriller Bark then only added her pre-skip outift as dlc. As for only WCI, I think Kaidou was also teased for it so it might be more than that or it might be a short version of Wano. I personally do like the unique story like the 2nd one did but most people would rather have things that follow the plot.

I have several questions:

1. What Angry Birds game is this?

2. Did they add Katakuri just because Flampe (and some other peoples in past) said his scarred face looks like PELICAN eel?

3. IS there any other OP characters and/or other anime / video game characters in that game?

I have several questions:
1. What Angry Birds game is this?
2. Did they add Katakuri just because Flampe (and some other peoples in past) said his scarred face looks like PELICAN eel?
3. IS there any other OP characters and/or other anime / video game characters in that game?

Looking at the original reddit post about it, the game is called Angry Birds Evolution. They also listed that there are costumes/birds that look like Deadpool, Wario, Putin, and Kim Jong Un (named Kim Fly Hi). When asked how to get the Katakuri bird they said you have a chance to recruit him during the current event but may show up later which means it's likely gacha/capsule style unless it's a complete the event style unlock. 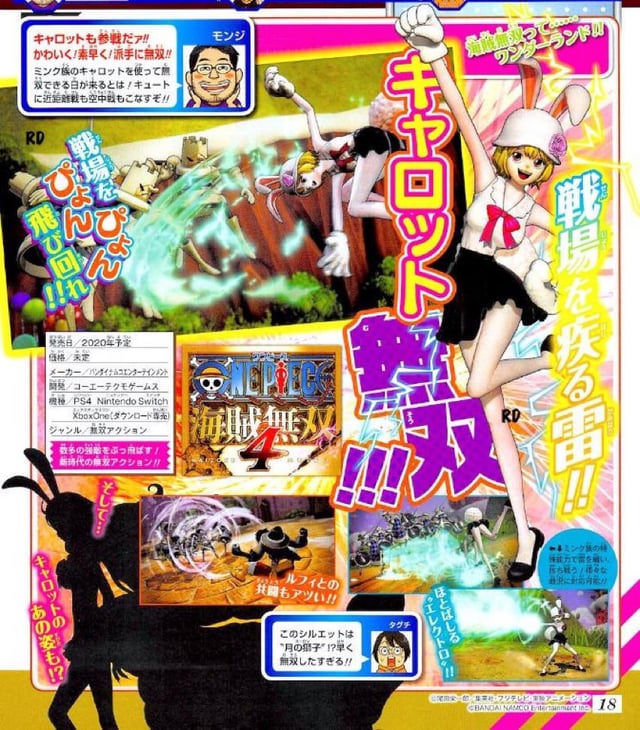 Pirate Warriors 4 is out now. Some characters were cut which makes some sense because some arcs were cut, although it's disappointing to people since some of the cut characters like Perona and Enel are fan favorites. However, dataminers have found out that some of them actually have content in the game. Were they originally intended to be in the game but cut or are they going to be sold DLC. There's a $30 player's pass that promises 9 characters but people are already angry that several of the dlc characters are just cut, old ones. I'll add the datamined characters as well but take them with a grain of salt until the actual dlc is confirmed.