18 replies to this topic

I can't be the only one watching this....

I'm surprised at how much I'm enjoying this show. It's pretty well-written and the skating parts are nice...but I like iceskating anyway.

I'm not a yaoi type person, but I must say, Viktor and Yuri are cute together.

Nah you're not the only one watching this lol....This show cracks me up xD

I just started watching and I could FEEL the gay coming out of screen while I watched the opening:

Ahem. That being said:

"Those two are made for each other"

I'm trying to make my sister finish Haikyu S2, so we can follow the ongoing one together, I hate watching stuff alone. Will give this a shot after we're done with Haikyu.

Nah you're not the only one watching this lol....This show cracks me up xD

Yeah, it's a really good song.

Japanese Yuri reminds me so much of Shinichi of Parasyte....when Shinichi was still a geek.

I just started watching and I could FEEL the gay coming out of screen while I watched the opening:

Ahem. That being said:

Like I said, I really ship Viktor and Yuri together. They're adorable.

The ending song is an earworm too.

-Yuri starts getting his mojo back as he wins this competition. Shall be interesting to see once he gets the kinks out of his performance out.

He likes Yuri and even gets his autograph.

-Victor realizes that Yuri is being rebellious...like he's been.

I think we just got some kind of declaration from Yuri at the end.  Anyway, VicYuri is cannon

Seeing all the attention it was getting I decided to pick this up. Absolutely among the best anime this season. Well, there are many elements typical of a sports anime and the jokes are good but not top notch. The plot isn't completely unpredictable. But I suppose none of these should really matter because the point of a sports anime should be to promote the  sport. And Yuri on Ice is absolutely doing a 10/10 job at making  Figure Skating fabulous, amazing, sexy, awesome, awe inspiring etc.

And of course, the yaoi is strong with this one. VicYuri are on their way to being my top gay ship. And the supporting characters are definitely making things even livelier. Minako Sensei( the heavy drinker ballet teacher) cracks me up. Proves to show people can be fangirls/boys regardless of age.

Episode 6 is out btw.

Gregori and Christophe were hilarious this episode. Gregori's Okama level would put Bon Clay to shame.

And I almost laughed my bowels out when Christophe said "I think I'm gonna come" by the end of his performance.

Also, a curious little detail picked my attention this episode. After Yuri knocked Minako's door so she could teach him how to move in feminine ways; he has been using "atashi" (a feminine way of saying "I") in his inner monologues during his performances. However, in this week's performance he has been using "boku"(a more gender neutral way of saying "I", though males prefer it more) instead of "atashi". Guess we can say it's another element in proving he's found the answer.

I mean this in a most positive way....but the gay was off the charts this episode

The Chinese kid is cute. So is Yuri's friend Pinchit.

I want this soundtrack. SO MUCH BOPS.

My reaction after 'I THINK I"M GOING TO COME': "Did he just really say that? :lol:"

I finally got around watching this.

Maybe it has to do with me knowing zero to nothing when it comes to ice skating, but I'm not feeling this like everybody else. There's no excitement to the ice skating scenes because the animation looks so off and awkward.

I'm not a big fan of romance in sports animanga, but I admit Victuuri look kinda cute together. I don't care enough about them to ship them though.

- The soundtrack. This track is beautiful.

- I like the new characters that got introduced in the last few episodes. I even like them more than the main trio tbh.

-Phichit(Thailand): A real cutie. Has the best outfit.

-Leo: Also a cutie. It's really nice to see a Hispanic representing 'Murica. His SP song is nice.

-Ji(China): Another cute one. If he wasn't underage, I would have shipped him together with Leo. - I love Georgi, protect my heartbroken son at all costs. Lmfao. 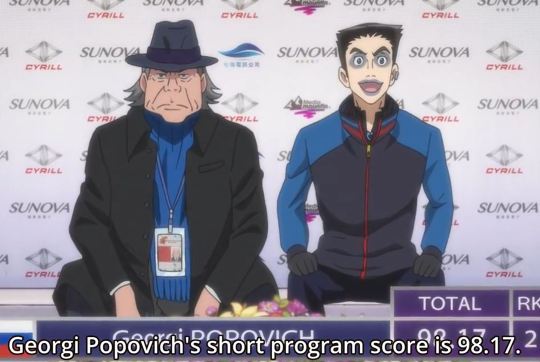 -Chris: Way to ruin one of the characters I was looking forward to the most(besides Otabek & the Italian guy) in less than 1 minute. The shots of his ass/balls was so disturbing.

Will stick around to see what otabek and the rest are like.

Other than the Yuris....BEST BOY

This episode was 10/10....But that kiss came outta nowhere lol

This episode was 10/10....But that kiss came outta nowhere lol

Bait. Looked like a kiss but he just glomped by the neck.

The episode itself was very good indeed. The first half was pretty uneventful and Yuuri's excessive nervousness was starting to piss me off. But the latter half was so good I forgot about it altogether.

But the sight of Chris saying "I think I'm gonna come again." while shoving his crotch on my face is gonna scar me for life X^X He is on par with the legendary Hard Gay.

Bait. Looked like a kiss but he just glomped by the neck.

The episode itself was very good indeed. The first half was pretty uneventful and Yuuri's excessive nervousness was starting to piss me off. But the latter half was so good I forgot about it altogether.

But the sight of Chris saying "I think I'm gonna come again." while shoving his crotch on my face is gonna scar me for life X^X He is on par with the legendary Hard Gay.

This made me laugh for some reason, but yeah.... I finished that scene wondering if he actually did since his face was all red. X_X

"Those two are made for each other"

I know it was bait, but my inner fangirl still says that Victor kissed Yuri.

WHERE ARE MY COMRADES AT??

I happen to love this show! The opening is such a jam, it's fun and not to mention GORGEOUS!

But in all seriousness, I love seeing a relationship that isn't just romance for the sake of romance, with a different plot moving around it. Not to mention they GAY AS HECK. Awesome!

The sparkly outfits are taking some getting used to tho

the end of episode 10 just about broke me

Spoiler i have died and gone to heaven

So I watched episode 1 and now I know why this sold so many BDs.

Anime-Planet cause I'm pleb. And yes, I've seen less than you have.

Just awesome. A must. Also the gateway to most every other Gundam ever.

Entry Barriers: "It's too old." The animation can be off putting to those accustomed to newer stuff.

World building up the fucking wazoo, loads of main, always relevant characters, some of the most beautiful OTP collections ever, well thought-out "conflict" sequences, just to name a few. This thing is packed, but ties everything together on a well established foundation. Truly one of the greatest constructed universes in Japanese media.

Entry Barriers: Probably requires research to understand everything i.e., reading the original novels and the prequels, consulting the tumblr/wiki page. https://just-believe.in/ has links to these and other resources.

Spoiler The Funny One
Humanity Has Declined

One of the greatest satires I've seen so far. Maybe won't appeal to a lot of people. but picks apart some flaws of mankind in a way that just feels spot on.

Entry Barriers: [Placeholder for when someone finds a noteworthy one]

Yeah yeah, it has the cute girls doing thigns going on but don't let that stop you. It was immensely worth. The delivery of the characters seemed a lot more natural to me than what I see most of the time. Yeah, the timing has to be one of it's greatest points. And it portrays the throes and woes of the workplace so fucking well! Working against the clock, dealing with incompetence. That and there's the details on the anime industry itself AS THE SUBJECT. Wrap that up with a colorful cast and you've got yourself a winner.

Entry Barriers: [Placeholder for when someone finds a noteworthy one]

Probably the anime with the most visually artistic flair in a long time.

An exemplar for all Japanimation. Indeed, it's quintessentially Japanese. Watching it all come together is fantastic.

Entry Barriers: It is very Japanese.

The series hasn't left much of lasting impression on me. It's great but not an instant rec.

Tengen Toppa Gurren Lagann {ROW ROW FIGHT THE POWER!! Lose yourself to the optimism!}
Similar, though at this point everyone and their mother should have come across it by now.

2. Replace the Xs with the corresponding forum post number.

4. Wait for the redirect.

Spoiler Wiio was right.
The fundamental Wiio's law states that "Communication usually fails, except by accident". The full set of laws is as follows:

3. There is always someone who knows better than you what you meant with your message.

5. In mass communication, the important thing is not how things are but how they seem to be.

6. The importance of a news item is inversely proportional to the square of the distance.

So I watched episode 1 and now I know why this sold so many BDs.

Because it's freaking awesome?