84 replies to this topic 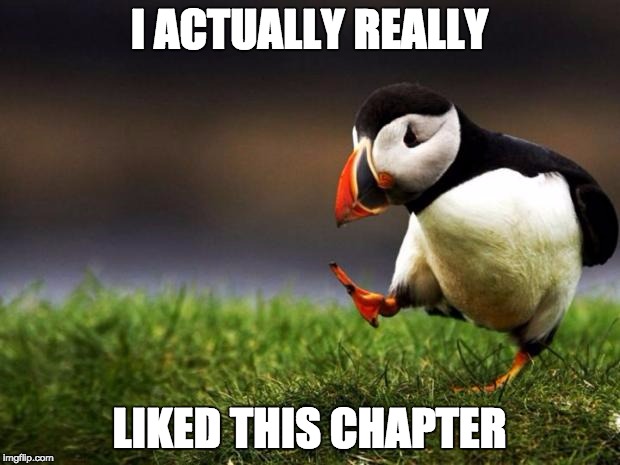 He is joking dude.
We all know the actual reason pudding is acting the way she is.
Sad part is his joke would of been a better reason.


I doubt it was a joke, this seems legit enough to me

I doubt it was a joke, this seems legit enough to me

I usually try to give people's insane ideas the benifit of the doubt until they say other wise.

Not because i am a nice person, because i dont want to write up 4 paragraphs about how the OP isnt in luffy's heart only for someone to tell me it was a joke.

Haha yea I was joking, but I wouldn't put it past Oda at this point. And like captain said, it'd probably be a better outcome

Woe the cover story, bartolomeo is the best when he is at his worst. Bartolomeo is great because he is a curel and powerful monster who inexplicably has a soft spot for a guy who is his polar opposite. That is funny. What nearly ruined him was seeing just how soft that soft spot is. Bartolomeo nearly forgot he was the toung cutting citizen bombing bastard, and all he showed was his good side, oda could of done more to show both sides through, it honestly made me think luffy turned him into a good guy.....seeing him back in action is awesome, great cover arc i cant think of a more deserving character to have a cover arc. Cavendish's was stupid and full of plot holes.....but Bartolomeo's is solid..... i am sure tai's will suck....


Chapter opens with brook and chopper, i already take back everything good i said screw this chapter i hate it. I cant think of a worse paring. Hahahahahah "look over there" "what ever" wow brook had the same reaction all adults have to chopper.

Tbh i never put too much thought into the "hunger sickness" thing since the moment i saw it we all assumed it was there to be a plot device that would further some nonsense in this arc. BUT....... I alwayd figured these "hunger sickness" moments were all random. Obviously from what we have seen elebaf wasnt and this one isnt, so that all being said. Why isnt bm actively trying to prevent these? I assume she doesnt want to destroy her islands, why doesn't she have a huge vault to store all her favorite foods, (or a book) why did her crew make such a large wedding cake but only get the exact ingredients needed...... jesus if i was the cook i would make double of every meal just incase she wants it again.

CoO still doesnt exist in this world. If it did luffy would know dogtooth is on his ship and he would know exactly the right way to go.

Now hold on one second. NOW zeus is able to hurt bm? Becase bm grabbed zeus in her hand and threw him at judge meaning bm was hit too but it did nothing, but now bm is damaged by zeus? I get it is a much bigger attack but if zeus can hurt bm why is bm theowing him around the way she does? We know zeus can do his thing without bm throwing him....

Also, i sure cant wait to see how the wldest son fairs in combat. He has been nothing but impressive if oda gives us a pesporo vs sh crew, and dogtooth vs luffy fight to end this arc i can get over not seeing BM fight.

ye so far Bartos story is awesome, i wonder, might that be a hint that Shanks will be interfering vs Kaidou? Barto still has the vivre card from Luffy does he not? So if Luffy gets defeated by Kaidou and imprisoned, perhaps Barto will get to know, and because of that Shanks too. Told u after DR , have faith, Barto has not lost his touch

Actually so far Brook has been one of the most useful SHs this arc, alongside Nami. I cant wait to see what he has gotten in his arsenal, and i am so freaking hyped about some SHs mostly Usoop and Chopper becoming far more tanky during Wano arc, especially Chopper i see unlocking CoA there, while Usoop will specify in CoO during this arc imo he will still  receivea lot of hits making him far more tanky.

That Brook is not part of the fighting force vs BM though seems kind of strange imo, he counters her to a degree after all and she seems fond enough of him, being a rare species and all, so why put him against Katakuri and Perospero? I rather see Sanji, Pedro, Carrot, Chopper and Nami together vs them, while Luffy, Jinbei, Brook fight BM. This arc is far more destined to let Brooks soul abilities shine than Wano imo, so why not do said lineup?

Perhaps we misunderstood them to a degree. Perhaps they aint anywhere near as common and frequent as we seem to think. There might still be the possibility of her ordinarily not having them. It was hinted that her lust for the wedding cake was building up for quite some time, as such it might be possible that that was part of the reason it happened twice this arc. She was just expecting too much, then with the cake and picture destroyed we have a totally different context than what might have EVER happened before (2 things happened after all cake and picture, that might have driven her crazier than she ever was before, since especially the picture is the most important thing to her as far as we know, as such she might not have completely been over it before the 2nd rampage even started). Furthermore i think u underestimate how much effort the crew had to go through to get the ingredients alone, several islands were  devastated simply for the reason of collecting the right ones , as such it is possible that some ingredients are rather rare, making BMs lust for it even greater from the get go. Moreover the cake was HUGE.

Perhaps all their focus rests on BM, leaving no room for ur mind to think about/ focus anything else. Somehting like this has always been presented as a part of the mastery of CoO (it needs actively being used and focussed on (vicinity), they might focus there back were BM is, instead of their front as to say) and how hard it is for it to be trained well enough.

Was she not clad in haki at that moment? Perhaps haki lessens the damage received, i dont know whether that is applicable to lightning though. Or maybe the difference is that in that moment she was in control of zeus while she aint in the moment with Nami.